Final notes on Round 2 of Business Class Waikato

ACC Warriors and Fonterra take out top honours in A and B grade respectively for Round 2 of the Business Class Table Tennis Waikato competition.

The A-grade competition was highly competitive with only 2 points separating 1st and 3rd place in the division. Top honours went to ACC Warriors on 25 points, with Forlongs finance in 2nd place just 1 point behind the winning team. While Waikato regional council narrowly missed out on a top-two finish ending on 23 points.

In the A-grade ACC has asserted their form with winning both round 1 and 2 of the Business Class Table Tennis Waikato competition, with remaining team member Jatinder proving to be the backbone to ACC's winning streak. However, Jatinder was not able to secure the win alone, he was supported this competition by team-mate Ryan.

The B-grade was also hotly contested by the six teams in the division. With Fonterra-fonterrorists proving too strong for their rivals finishing top of the division on 32 points. With the final week seeing a tight match between the two teams who were fighting it out for the second step on the podium, with Forlongs bandits narrowly taking out the place above the second Fonterra team. The winning Fonterra team members were Jimmy and Malcolm.

Well done to all teams on their efforts and to all medal winners!

The competition will run for 6-weeks, on Tuesdays from 6-7.30pm. Teams are to comprise of at least two players from the same work organisation (you can have more than two players as long as your organisation ensures two players are present each week to compete for your team). Cost is $80 per team.

So, what are you waiting for???

Get your colleagues together and enter today. Entries can be made online at https://www.businessclass.nz/join/ or by emailing team name and members to waikatotabletennis@gmail.com 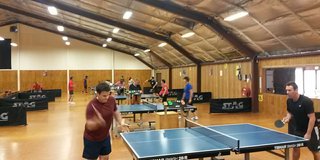 Next Waikato Comp Starting 29th May